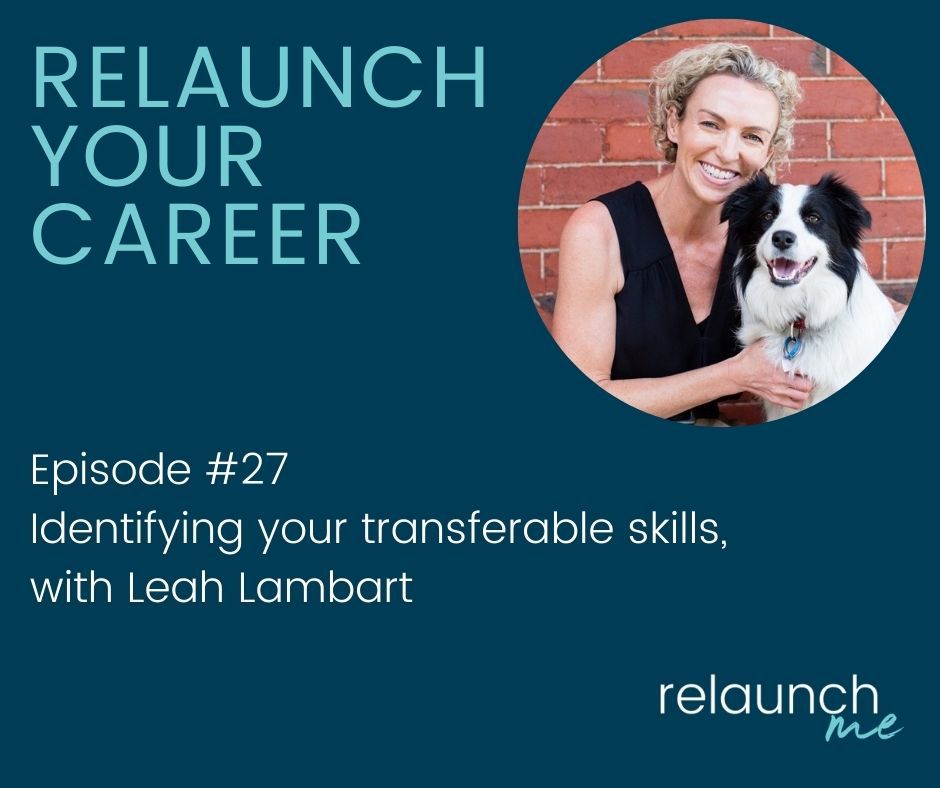 In this episode, Leah discussed the importance of being able to identify and articulate your transferable skills when looking to make a career change.

In this episode, Leah discussed:

If you need help identifying and articulating your transferable skills, then contact Leah on leah@relaunchme.com.au

Leah Lambart 0:02
Welcome to the Relaunch Your Career podcast. I’m your host Leah Lambart, Career and Interview Coach and Founder of Relaunch Me, where we help you find the work that you were meant to do.

Hello, and welcome to Episode 27 of the Relaunch Your Career Podcast. I am your host, Leah Lambart and today I am recording on a pretty dreary Melbourne day. So, for the first time in a couple of weeks, I’m actually not that disappointed about being locked up because it’s pretty miserable out there.

In today’s episode, I’m keen to talk to you about transferable skills and in the current job market and in the job market post COVID-19 it’s going to be particularly important for many people to be able to clearly identify what their transferable skills are and to be able to articulate those, both in interviews, but also on their application documents, in their cover letters and their resumes. We’ve been talking to a lot of clients in the last couple of weeks who have been forced to consider a career change as those as the result of COVID-19. Some of those are coming out of industries such as travel, tourism, events, hospitality and entertainment. And as a result, many are starting to think about how they can make a move out of this industry, and what skills that they have that could they can take with them without potentially having to go back to study or retrain.

What are transferable skills? Transferable skills are core skills and abilities that are bigger than just one job or one company or even in one industry. So you can take those and apply them to working in different jobs. So there’s some typical categoriesthat these types of transferable skills would fall into. The first one is anything to do with dealing with people. So, examples of people related transferable skills would be communication skills and that might be your ability to adapt your communication style when talking to people from a whole different range of ages and backgrounds. One of the core people skills that comes up a lot as a transferable skill is communication skills. So, communication skills isn’t just about talking to people. It’s about being able to adapt the way you communicate to a particular audience. So if you’ve worked in travel or hospitality, or basically any career where you’re working with the public, you probably have the ability to adapt the way you communicate for people from all walks of life, whether it’s a small child, an elderly person who may be hard of hearing, a person where English is a second language, or someone with a disability. Often we are adapting the way we communicate by speaking slowly, using simple plain English, using hand gestures, all of those types of things that we are often not even aware that we’re doing them.

If you’ve worked as part of a team, obviously, teamwork and collaboration is another transferable skill. That’s a core skill and I really don’t know many roles out there at all that don’t require that type of skill. If you’ve managed teams then you have leadership skills. Often people can move to different industries if they’ve had experience leading a team, which might also include recruiting people, performance management, coaching, mentoring and developing people then it is possible to potentially move to a new industry in a leadership position, depending obviously on how difficult it is to learn the subject matter and perhaps the technical side of that industry.

Another area of transferable skills is around problem solving and analytical skills. If you’ve got core skills, doing research, data analytics, collecting data, analyzing it and reporting on it, again, that is a skill that could be used in many different industries. Any administration skills if you are doing diary management, travel management, email management, filing paperwork, etc, then they can obviously easily move across organizations and across industries.

So what is going to be most important is that people can really recognize what their transferable skills are and then articulate them in the application process. I always recommend having a key skills section on the front page of your resume, where you can clearly demonstrate that you have the skills to meet the competencies required to the job. So even if you don’t have the specific industry experience, it’s up to the candidate to make the link to let the employer or recruiter see that you can do this job, even though you haven’t perhaps worked in that industry before. Often some of the technical side of the role can easily be trained. So if there is a need for people to work in that area, they can often train you up and you can upskill and learn the technical side, but it’s the core skills often that most Important at the end of the day.

So where should you have your transferable skills? So, as I mentioned before, definitely in your resume, we would always recommend that when you write your cover letter when our resume writers write cover letters for people, they would always mention some of the core competencies or skills in that cover letter. Likewise, it’s really important that you can articulate your transferable skills in an interview. So what’s going to be really important in interviews, as I’ve spoken about before, is understanding the core competencies and skills required to do the job and having very specific examples of where you have demonstrated those skills in the past. So the example I was talking about before with communication skills, being able to really spell out how you might have adapted your communication when talking with a particular person from the public in a previous role to demonstrate to the interviewer that you are able to do that, even though you may have not worked in that work environment.

I want to give you an example of I was working with a client recently who I was coaching for our emergency services firefighting interview coaching session and he had actually come from a background working as a tour guide. So he was a little bit stumped as to what his transferable skills were. He had come up with a few like teamwork and leadership as he was managing teams on these tours. We also talked about, obviously the one that I mentioned before communication skills. So when he was running these tours up in the Northern Territory, the majority of the passengers were non English speakers. So he had this tremendous ability to be able to adapt the way he could communicate particularly around quite complex things. Such as safety guidelines when they were going on difficult hikes around things that were happening in the campsite. So he had to really adapt and use the right language and be able to articulate these things because otherwise these people would be potentially in danger. We also talked about a transferable skill being his ability to communicate with people from diverse backgrounds. So that’s not necessarily communication. It’s more around diversity and inclusion and actually having experience working with people who come from different backgrounds. So not only had he spent all this time working with passengers who are from countries all over the world, he’d also had a quite a lot to do with indigenous communities in the Northern Territory and in Western Australia. You know, he’d really upskilled himself in learning about indigenous culture, being aware of different communication styles and different customs. had spent a lot of time with indigenous people so that he could be sure that he was bringing them not only educating the passengers about the indigenous culture but also ensuring that they weren’t offending the indigenous communities in any way. So that’s definitely a skill that he could take to working as a firefighter because firefighters are required to work closely with the community and working with groups who have come from diverse backgrounds. So his ability to be able to again, adapt his style and his communication is definitely a transferable skill.

Not only that, he’d obviously been used to driving large vehicles, and had fantastic transferable skills around the mechanical aptitude and problem solving. So when a tour bus breaks down in the desert, he would be under the bus trying to work out what was wrong, consulting with other people in the team. trying to solve problems often in high pressure environments. So again, one of the key roles of a firefighter is not only fighting fires, but it’s also looking after the equipment, making sure that they can obviously drive the vehicle and being able to maintain everything on the fire truck. In addition, there’s the safety side. So he had extensive experience in first aid and CPR, which is also required of a firefighter as well as a huge awareness around general occupational health and safety. So obviously, a key part of a firefighters role is being able to identify safety risks and hazards and not only for them for themselves, but also talking to the community about fire safety and fire prevention. So having worked as a tour guide, where he’s been responsible for large groups of people for a long period of time, obviously safety is paramount. And another one that I came up with was map reading. So not everyone is good at reading maps. But when you’re working in the desert and you’re on dirt roads, then obviously map reading is something that is pretty important and obviously crucial that a firefighter can read a map as well. So I just wanted to give you an example of how a career like a tour guide to how there’s so many transferable skills that relate to any type of emergency services role.

Hopefully that will get you thinking about what your transferable skills are, and and how you can really identify those and then come up with really specific examples so that you can articulate those to a future employer.

If you do need any help with this, we have a team of coaches, myself, Emily and Clare, who can help you with this. And we also have a wonderful team of writers who can help you get your transferable skills across in your resume, cover letters and LinkedIn profile so that you are putting your best foot forward.

If you have any questions about transferable skills, please send me an email my email is leah@relaunchme.com or you can find us through the website. The website address is www.relaunchme.com.au

I hope you enjoyed this episode of relaunch your career. If you did, please subscribe, share with your friends, leave a review or connect with us on social media at rely May Korea consulting. If you have any questions about the episode or the work that we do, then contact us by the website relaunch me.com.au Thanks for listening. Have a great day.